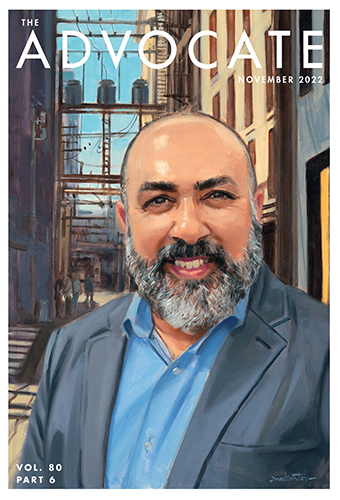 The November 2022 edition of The Advocate is a bit of a unicorn issue.  It features Aleem Bharmal, K.C., the CBABC President in the front cover. Louisa Winn, K.C. and Tina Parbhakar report on how this kid from Scarborough, Ontario went from being a Bay Street lawyer to a BBQ’d lasagna eating director of the Community Legal Assistance Society and beyond!

Inside the magazine Entre Nous asks the question: is law a trade? (hint: it isn’t).

We feature some great scholarship by the late Christopher Harvey, Q.C. on Richard Haldane, a man who shaped Canadian law from the hallowed halls of the Privy Council.

Also published is a cautionary tale from Aminollah Sabzevari on why British Columbia should not follow Ontario’s lead on preconception medical duties to future children.

Sarah Pike tells us in Part II of her article of Canada’s flirtation with Terra Nullius and why that’s not necessarily a good thing.

Your editor, D. Michael Bain, K.C., examines the demise of the Crown and just how a Q.C. becomes a K.C. without doing much at all.

We also feature an article from 1994 by Li Xiu Woo tracing how “judicial notice” beat historic evidence in the 19th Century decline in women’s constitutional rights.

All of our regular features lead to a final prance through Bench & Bar where unicorns and lions feature triumphant and resplendent.

The Advocate archives (from 1943 to date) are searchable through Hein Online. The service is provided free to members of the Law Society of BC and is accessible through the BC Courthouse Library website – www.courthouselibrary.ca.